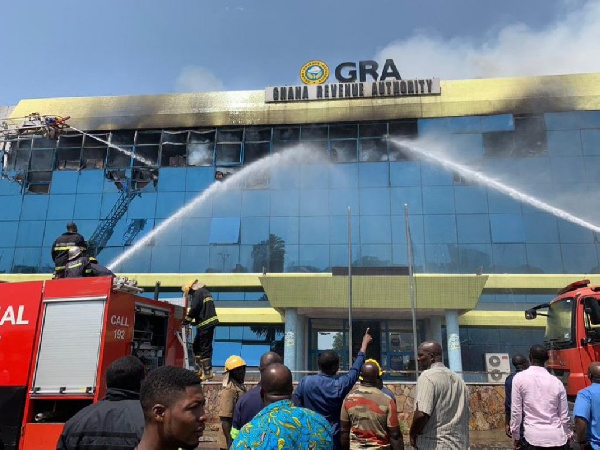 An eye-witness, Mr Iddrisu Mumuni, told Graphic Online that he spotted the fire at the back of the building at about 7.30 am and rushed to call the fire personnel who were stationed under the new overhead bridge at the Nkrumah Circle.

When Graphic Online got to the scene at about half past eight, personnel of the Ghana National Fire Service (GNFS) were still struggling to put out the fire.

The fire had spread from the back of the building to the front, mainly visible at the upper floors of the four-floor storey building which underwent rehabilitation about 10 years ago.

The incident drew many people around Nkrumah Circle to the scene, with motorists driving at slower pace on the Ring Road Central, from the building, which houses Busy, an internet service provider, mainly due to the thick dark billows of smoke which made visibility poor.

Some inquisitive motorists also parked their vehicles to catch a glimpse of the raging fire, with many having their smartphones hoisted to record videos.

The more the fire personnel sprayed the building with water, the more it seemed the fire razes since the building is coated with ceramic tiles facades that make it difficult for the water to pass to the inside of the building where the fire is most debilitating.

The service had to deploy one of its largest fire engines with a riser platform to provide more accuracy to reach the base of the fire.

The personnel were also impeded by some vehicles parked in front of the building, which prevented the fire engines from entering the innermost perimeters of the compound.

In the midst of their struggles, theories are developing among the eye-witnesses and by-standers.

While some believe it was a deliberate attempt to set documents ablaze, others dismiss the notion as petty because such fires, specially those razing state property had been with the country for many years.

Meanwhile, the Fire Service said it could not immediately ascertain the cause of the fire.

One of the personnel, who spoke on condition of anonymity to Graphic Online said their immediate preoccupation was to douse the fire and prevent it from spreading to adjoining buildings.