Debt in developing countries has doubled in less than a decade 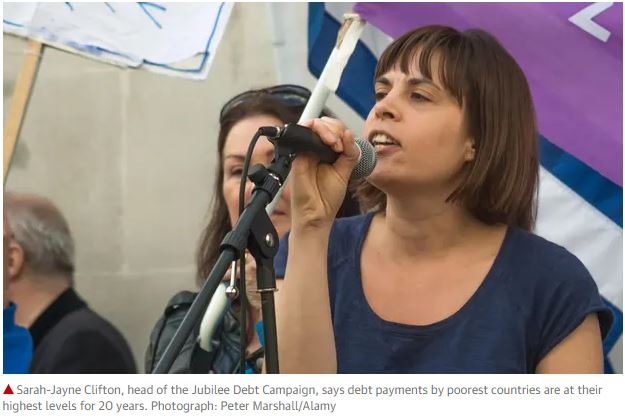 Developing nation debt has more than doubled in the past decade and left more than 50 countries facing a repayment crisis, according to a campaign group.

Data from the Jubilee Debt Campaign shows that even without taking full account of the impact of the coronavirus pandemic, there has been a sharp jump in the number of poor countries in debt distress since 2018.

Debt relief was provided for poor countries at the end of the 1990s and in the mid-2000s, but the JDC said external debt payments as a share of government revenue had more than doubled from 6.7% to 14.3% since 2010 and were at their highest level since 2001.

The International Monetary Fund and the World Bank have both warned of the risks of a new debt crisis and have been urging private sector creditors to join governments and multilateral creditors in coming up with a comprehensive relief package. More than 100 countries have sought help from the IMF since the crisis began.

The JDC said the number of countries in crisis had increased from 30 to 52 since 2018. The figures are likely to heighten concerns that many poor countries will find their debt burdens unpayable at a time when they are facing the quadruple blow of a global recession, weaker currencies, higher interest costs and a drop in remittances sent home from workers in developed nations.

Sarah-Jayne Clifton, the director of the Jubilee Debt Campaign, said: “Debt burdens were already taking much-needed money away from healthcare and social protection before the Covid-19 crisis hit, and the situation is rapidly deteriorating. Debt payments for poor countries are at the highest level in 20 years. We need urgent action to cancel payments, to reduce debt to a sustainable level, and to rein in irresponsible lending to stop debt crises coming back to haunt us every decade.”

The JDC said some of the data for its estimates of debt distress came from IMF and World Bank sources that did not yet take full account of the impact of the pandemic on government revenues and debt payment levels. The real figures were likely to be worse.

The campaign group said its new debt portal provided a more sophisticated analysis of debt levels and risks, including the threats of private sector debt crises in developed countries such as the UK and the US.

The JDC said its analysis included details of:

“Together, these measures provide a more accurate picture of the debt situation of a country than the traditionally used measure of government debt as a percentage of GDP,” the JDC said.

“Government debt to GDP takes no account of the interest rate on the debt, the government revenue available to service debt, the period the debt is owed over, whether the debt payments involve money leaving the country concerned, and the scale of debt owed by the private sector of a country (as opposed to just the government/public sector).”

Story by “The Guardian”